Opinion
One of the few genuinely hikeable trails in this corner of BC, Garibaldi Lake is a beautiful destination, albeit one where all the good stuff is quite distant. I think it’s worth adding in the section through Taylor Meadows with its views of Black Tusk ahead and the Tantalus range behind. The downside of such an easy trail is that it attracts far too many unprepared hikers, even after snowfall in late October. Please do your research and make sure you’re properly equipped for the conditions!

The trail was largely bare with patches of icy snow for the first couple of kilometres, after which the snow became more of less continuous, reaching about 30 cm up in Taylor Meadows, and nearly 15 cm at Garibaldi Lake. Route-finding was not an issue as the trail was easy to follow thanks to the passage of many, many feet. Microspikes were handy, though not absolutely necessary, on the ascent, but invaluable on the descent. Parnassus Creek was mostly frozen over, but could still be crossed (with care) without traction aids.

We took the detour up to Taylor Meadows as far as Outhouse Junction before descending to the lake. On our return, we opted for the short-cut up to Taylor Meadows again to avoid the crowds on the section past Lesser Garibaldi and Barrier Lakes. All outhouses were open but bring your own sanitizer of course.

It was busy with many hikers enjoying the sunshine. It was disheartening to see that so many had poor footwear coupled with little or no other gear or supplies. We saw perhaps 8-10 other hikers with microspikes (others may have carrying them and just not using them), and caught a few inquiring looks as we passed other hikers who were struggling on the icy snow. One person did ask where they could buy some, which was encouraging!

A few fungi were still making their presence felt, mostly small coral fungi and some tiny little grey ones. Near the lake, a few frozen boletes were still poking through the snow. Wildlife came in feathered form, with many begging whisky jacks at the Barrier, the lake, and at a few points along the trail. A varied thrush hopped along the path in front of us at one point, kinglets cheeped in the trees above us, and the occasional raven croaked on its way past. The highlight was watching a dipper bob on the surface of the lake like a cork before flying off with its buzzy call to find a rock. We saw snowshoe hare tracks near the lake and at a couple of places along the trail. 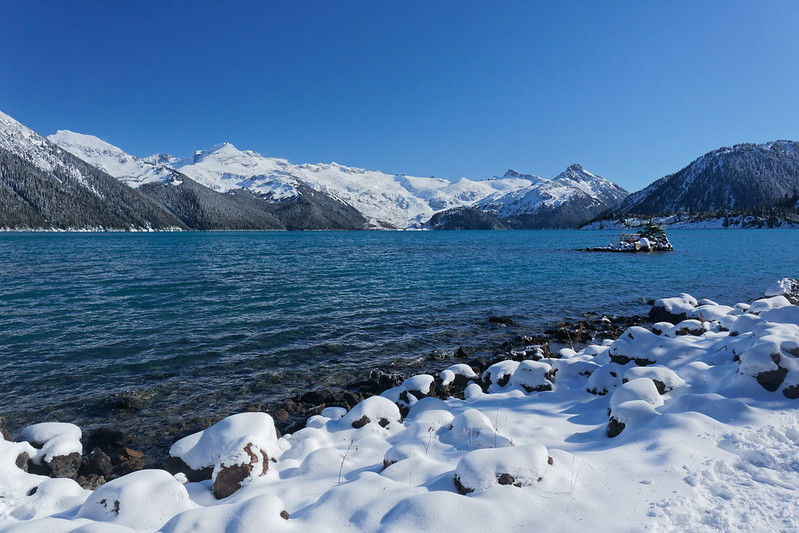