Opinion
With its true subalpine feel Mount Seymour remains my favourite North Shore peak, and watching a winter sunset from First Peak is a wonderful spectacle. It’s busy, though, so don’t expect solitude, and it will soon be even busier.

Fact
The ski resort was not yet open, so finding a parking spot was much easier than usual, especially when we turned up at about 2 pm. The resort is due to open on in only a couple of days and staff were getting things ready for opening day. Bring a mask if you need to venture indoors (including washrooms). Don’t expect other people to keep their distance either – far too many people were quite happy to pass by well within two metres of us, despite our efforts to step off the trail where possible. Very few people yielded to us or gave enough space. Sigh…

The winter route was marked with poles nearly all the way to First Peak, stopping about 150 m short. At lower elevations the snow was soft and slushy. Higher up, roughly from just below Brockton Point onwards, the snow was hard-packed with a sugary layer on top of an icy crust. The crust was sometimes supportive, but would break easily with only a little extra weight. Snowshoes were not necessary; microspikes were useful but plenty of people weren’t bothering, just relying on whatever grip their footwear provided. (In some cases that was next to none…)

As ever, many people have slid down the trails making it extremely hard to descend in places. Please don’t do this! It’s much safer to make a slide off the trail!

A few ravens croaked around the parking lot and near First Peak, and a few whisky jacks were hanging round a group of hikers about two-thirds of the way to Brockton Point. Apart from that, it was very quiet on the animal front. 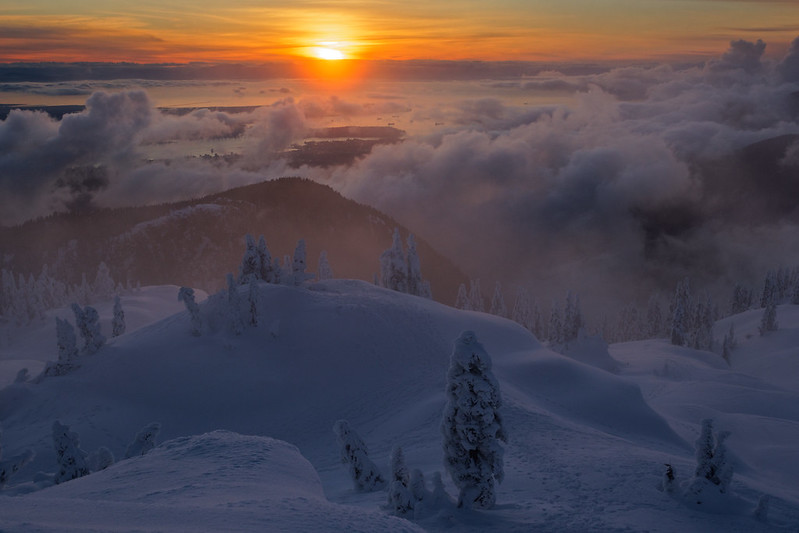